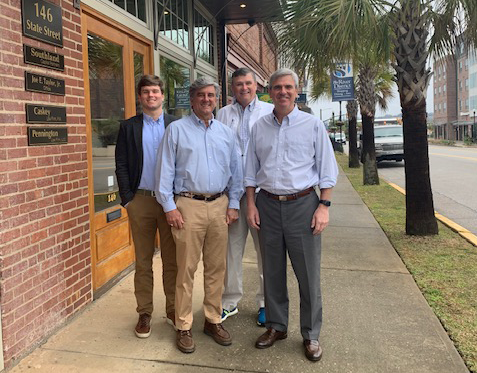 Taylor, who served as the state’s commerce secretary from 2006-2011 under Gov. Mark Sanford, is the former president and CEO of Southland Log Homes in Irmo. Since selling that business and leaving government service, Taylor has been an active investor and real estate developer across the Southeast. With offices on State Street in West Columbia, Taylor has become one of the city’s leading developers, with multiple projects.

Before founding Cypress, James spent 10 years in corporate real estate where he built a reputation of professionalism based on his attention to details and his skill in completing projects on-time and on-budget. Upon returning to Columbia and entering private development, he has been responsible for the successful completion of shopping centers, retail, restaurant and medical properties in an eight-state area along the East Coast.

Baldwin, a former partner and principal at Colliers International, has developed and sold in excess of 100 properties in seven states with an aggregate value in excess of $400 million. He specializes in the development of single-tenant properties, with clients including Advance Auto, Dollar General, Bojangles, Doctor’s Care and BI-LO.

Spring Street partners is committed to the redevelopment of West Columbia and sees great opportunities for both residential living and neighborhood commercial.

Enjoy the carefree benefits of a freshly built construction with all the character of a vintage home at St Anns Alley in West Columbia. Call 803-354-4050 to schedule your personal tour today.